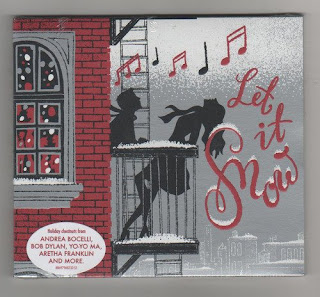 Let It Snow is this year's Christmas CD from Starbucks and it's another good one. The Seattle coffee chain's annual collection of seasonal tunes are always among the best compilations assembled for the holidays. A lot of thought has gone into every single one of their Christmas discs and, as always, they combine tracks by famous heritage artists with more current stars (along with a couple of complete unknowns) yet somehow they make all of the songs feel as if they belong together.

At first glance I was disappointed when I saw Brenda Lee's name on the song listing. "Here we go again," I thought, "the same old stuff." But what to my wondering eyes should appear was not "Rockin' Around the Christmas Tree" but her version of "Jingle Bell Rock." Yes, it's a very famous song by an artist we always hear from at Christmas but it's a different version than the one we are normally exposed to so my faith in Starbucks was restored. They always offer something a little different without getting too far out on the edge.

Death Cab for Cutie is accounted for with a slower version of "Christmas (Baby, Please Come Home)" then we are normally accustomed to and Alison Krauss brings a genuinely unknown tune to the table with "Shimmy Down the Chimney (Fill Up My Stocking)." A once popular, but long forgotten jazz singer, Julie London, is represented with her version of "I've Got My Love to Keep Me Warm," and an up and coming unknown, Rosie Thomas, sings the title track.

The Starbucks tradition of eclecticism continues with Duke Ellington's very unusual take on Tchaikovsky's "Dance of the Sugar Plum Fairy" called "Sugar Rum Cherry" and another artist not normally associated with Christmas, Fiona Apple, sings "Frosty the Snowman." Bob Dylan released a Christmas album two years ago for charity. One of the tracks from his disc, "Must Be Santa," shows up here. Bing Crosby is on board too, but he’s not singing "White Christmas." Instead he does "It’s Beginning to Look a Lot Like Christmas." Yo Yo Ma closes the disc out with a beautiful treatment of "Silent Night."

Andrea Bocelli, Neil Diamond, The Ronettes, Dolly Parton, Aretha Franklin, and Elvis Presley are all featured on this CD too.

All of the Starbuck's Christmas CDs are quite enjoyable because they make good song choices and don't just rehash the same tired old versions.