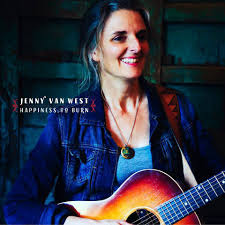 When an artist's songwriting and vocals blend together seamlessly it's easy to fall in love. Such is the case with Portland, Maine's Jenny Van West who possesses both of those assests in abundance on her brand new album, Happiness To Burn.

Yes, Americana is a very broad title but it fits performers like Van West whose work can't be pigeonholed into one particular genre. She finds a place for a little old time jazz, mixed with some pure country, a little roots rock, and some singer-songwriter fare.

All ten, very good, original songs are topped off with a voice that is both powerful and sweet at the same time. As a singer she could easily succeed at any vocal style she pursued and would destroy (in a good way) the great American Songbook if she chose to.

The set list is quite varied. "Twenty-Seven Dollars," the most country influenced track, is about "a boy who loves me a little too much." "Live In A New Way" was inspired by the murder of Freddie Gray. The current vinyl revival is mostly about the LP but "45" salutes those small, mostly forgotten, seven inch discs with the big holes that dominated my record collection at one time. The title track has a definite vintage jazz vibe that is very pleasing to the ear.

The fast songs are the better ones but you won't be disappointed with anything this singer-songwriter has to offer.

Happiness To Burn is Van West's second full length release, along with one EP. Fans of roots music must add it to their collections now.