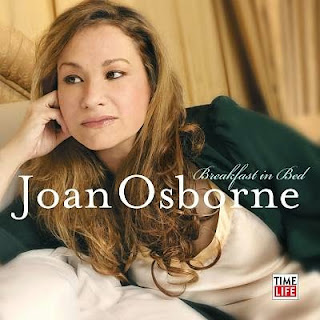 On Joan Osborne's major label debut, Relish (1995), she sold herself as a blues queen and she had some success with it although she often came on too strong in the process. It felt as if she was trying too hard. Later, on Pretty Little Stranger (2006) she took a turn towards being a singer-songwriter, again with only modest artistic success. Recently, she teamed up with rocker Jackie Greene to form Trigger Hippy and they released their new quintet's debut CD in 2014. Once again she gave us some very good moments but, as it turns out, both Greene and Osborne are more rewarding separately than they are together.

Those albums are worth mentioning because it's time to reiterate something that I've written before: Osborne's greatest strength is as an outstanding interpreter of other R&B artists' work. There aren't many singers who are more comfortable with someone else's material more so than with their own but Osborne is one of the rare exceptions. I'm not trying to knock her songs because she does possess talent as a composer. It's just one could make the case that she could be the best female, blue-eyed, soul music interpreter working today.

Osborne first demonstrated this talent on the excellent How Sweet It Is (2002), a disc of mostly soul covers she released fairly early in her career. She is even better on the the superb, sixteen song, Breakfast In Bed. It has none of the histrionics she succumbed to on Relish or Trigger Hippy's eponymous disc and she applies just the right amount of expressiveness to her delivery so that you know she feels every word. At times the Brooklynite comes across as a female Al Green or Boz Skaggs.

Breakfast In Bed's arrangements often employ a string section that benefits the Philly soul numbers, "Sara Smile" and "Break Up To Make Up," that Osborne so effectively lays down here. Her performance of the latter is even better than The Stylistics' 70s hit because she sings it in her natural voice instead of the original's cloying, falsetto lead vocal.

She takes "Breakfast In Bed" and turns it into her own song. No apologies are necessary to the late Dusty Springfield and "Kiss and Say Goodbye" is as tasteful as a ballad can be.

Her take of Bill Wither's "Ain't Know Sunshine" won't make you forget his original and she's not quite as soulful as Gladys Knight and The Pips on "Midnight Train to Georgia" but both are good enough even if they're not definitive versions. Much better is the opening track, "I've Got to Use My Imagination," one of the record's grittier moments penned by Gerry Goffin and Barry Goldberg, another hit for Knight. This barn burner is a great way to open the album.

Osborne kicks the volume up a notch for two live covers she performed on the Standing In The Shadows of Motown documentary. The Funk Brothers back her on "Heat Wave" and "What Becomes Of The Brokenhearted" has deservedly become one of her signature concert performances.

Osborne brought in five of her own songs to complete the album and they're all seamless fits.

Producer Tor Hyams knows R&B well. His placement of strings, horns, and harmony filled backing vocals is superb and he uses his abilities to make this album sound as if it was recorded during the era when many of these timeless classics came of age.

This is an almost perfect album. Osborne may never make a better one.
Joan Osborne Pop Vocals Rhythm and Blues