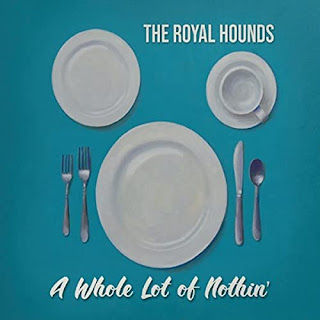 The Royal Hounds make it easy on bloggers who want to discuss their new album. Here is what the trio says about their fifth studio record, A Whole Lot of Nothin', on its accompanying press release: "And By Nothin’ We Mean Fiery Honky Tonk With A Rock And Roll Edge Served With A Healthy Sense Of Humor." In addition, veteran, Laurel Canyon bass player Leland Sklar calls them “The Spinal Tap of downtown Nashville.” Both of those quotes are so perfect that I could end this review right here, but that would be cheating, right?
For those of you unfamiliar with this group The Royal Hounds are Scott Hinds on bass and vocals, Matheus Canteri on guitar and background vocals, and Nathan Place handles drums, percussion, and organ. Canteri also served as producer of the thirteen song set.
Recorded in Nashville, the sessions were engineered by John McBride (husband of Martina) and Jeremy Cottrell who worked with both Jim Lauderdale and Raul Malo.
Hinds wrote most of the album during the unfortunate, recent lockdown to give him something to do. True to form, he wrote a whole set of tunes that often erase any of the boundaries between rock, country, surf rock, and rockabilly. The Hounds can even shred when the mood hits them. The good time outfit doesn't follow current trends but they're so accomplished at what they do that anyone with an open mind will find a lot to like here.
Diversity abounds. There are traditional country songs (“Invitation to be Lonely,” “The Jukebox is Broken,” and “I Just Can’t Two-Step”) and an invigorating rocker, "Cheap Drunk," that opens the album. Two instrumentals, the Latin tinged "Door #3" and the country-fused "Corn Fritter" add to the band's eclecticism.
One of two bluegrass tunes, "Pickin' In the Graveyard" has the great lyric, "There’s a bluegrass jam that not everybody knows, where old songwriters go to decompose.”
There is even a Christmas song with the clever title "Krismastofferson." This holiday treat is based on "the country music legend that when Kris Kristofferson wanted to pitch Johnny Cash his song, "Sunday Morning Coming Down,” he borrowed a friend’s helicopter and landed it on Cash’s lawn to get attention."
The Hounds' many influences add to their eclecticism. Producer Canteri is a native of Brazil so he grew up listening to completely different music than what he plays now with this talented ensemble. Place studied viola in college, and songwriter Hinds is the one with a bluegrass background.
Despite their often irreverent and humorous catalog the trio is serious about their work. A Whole Lot Of Nothin' offers more pure country than their last set, Low Class Songs For High Class People, but don't let that put you off. This collection still rocks, and the word all around Music City is that they are among the very best live acts in town.
Country Rock 'n Roll