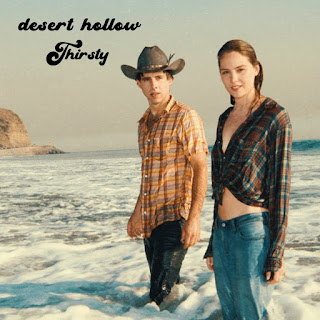 Xander Hitzig and Nicole Olney are Desert Hollow, a young California duo who have been compared to Gram Parsons and Emmylou Harris. Musical comparisons to those two 70s legends have become almost too commonplace with any new male/female couple working in country or folk music today. That early praise is often unfair because if the recipients of it do not live up to the positive advance notices they're often looked upon as disappointments. I don't want that to happen to Desert Hollow, but, after you listen to Thirsty - the couple's five song, debut, EP - you'll know why those analogies are being made.
Olney sounds like Harris when she is front and center and Hitzig harmonizes perfectly with her when he's not singing lead.
Hitzig is from rural West Virginia and Olney, his partner in more than just music, is from the California desert. Their rural upbringings heavily influence the pair's sound. Their songs are full of banjos, guitars, fiddles, and tin whistles.
Hitzig and Olney call themselves "weirdos" who proudly live an artistic way of life. Hitzig has busked with his fiddle and Olney has written poetry and a film that has appeared at the Cannes Film Festival. They took their RV on a road trip from West Virginia to Southern California, stopping along the way to film their video for the EP's title track. They even resided in an old GMC van until they found permanent digs on Venice Beach, and they dress as they live.
Songwriting comes naturally to Desert Hollow. "Thirsty" is a unique love song with great harmonies and an ingratiating melody.
"I’m thirsty every day but there ain’t no drink that fills me up for good
So baby I’ll drink you just a little more than I think I should
And when the well runs dry I still try and try to fill it up again
I turn the things I love into nothing more than means to an end
Well baby it’s no wonder
That I feel most myself in the rain
And when I hear that thunder
It feels like coming home again
I’d rather be in big sky country
Take me way out there where all the songs are blue
Wherever I’m goin’ honey
I know that I’ll always be your fool."
Hitzig shows his sense of fun and love of Desert Hollow's lifestyle on "Take Me Back To Nowhere." He sincerely means every word he sings.
"Though the city’s fun to visit for a beer
In my van there ain’t no shower and there’s hardly any power
In the city these two things can mean a lot
In the country I can cook on a fire by a brooke."
I know it's only April but Thirsty could very well be the best music I'll hear by an up-and-coming act this year.
Folk Singer-Songwriters