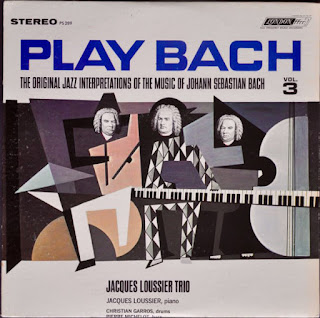 Most people are unaware of Jacques Loussier. He was an excellent French, jazz pianist and classical composer who passed away on March 5, 2019.

Many years ago, without any knowledge of who they were, I picked up an album by the Jacques Loussier Trio, Play Bach, Vol. 3 (1963), from a woman who held large record sales in her cellar twice a year. Her bargain basement prices demanded that purchasers take an occasional risk with their cash and sometimes they paid off handsomely. I could go on forever about some of the gems I discovered there and Loussier's record was one of them.

Since this was the 80s, after greatly enjoying the pianist's unique work, I purchased more of the trio's later albums on what was, at the time, the new and exciting CD format. (My, how times change).

Until now I never knew a thing about Loussier. I just played his albums and that was the end of it. I only discovered he had a long, successful career when I saw his recent obituary on another music website. That piqued my curiosity enough to research his life.

Beginning in 1959 the trio performed light jazz arrangements of Johann Sebastian Bach's repertoire. You could tell Loussier was classically trained but he rounded out his band with real jazz men. He was supported by upright bassist Pierre Michelot, who played with Miles Davis and drummer Christian Garros who was a sideman for Django Reinhardt.

Some serious music critics were not happy at the idea of interpreting Bach in the jazz idiom. In 1975, New York Times' John Rockwell wrote that he was "actively appalled by the very notion of 'popularizing' Bach - or any classical composer, for that matter." "Mostly," he said, the group "stuck too close to Bach for jazz and too close to cocktail/salon jazz for satisfaction."

The pianist broke up the trio in the mid-70s then resurrected it in 1985 with different musicians to celebrate Bach's 300th birthday. In their second incarnation they expanded their repertoire beyond Bach's music and recorded jazz versions of Vivaldi, Beethoven, Handel, Ravel, Chopin, Mozart and Satie. Overall, Loussier's two trios released thirty-two albums.

Loussier was more than just an interpreter. He also composed music for more than a hundred movies and TV shows as well as a trumpet concerto, a ballet, and a mass.

Loussier opened his own recording business, Studio Miraval, in the South of France in 1977 where he composed his own works. Believe it or not, he also recorded rockers Pink Floyd, Elton John, Sting, Steve Winwood, Yes, Chris Rea, AC/DC, UB40, plus singers Shirley Bassey and Sade, and a host of others. Parts of Floyd's most famous album, The Wall, were recorded at Miraval. He sold the studio in 1992.