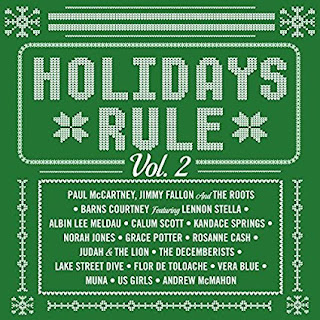 Holidays Rule, Volume 2 is the second unique compilation of Christmas music backed by MPL (McCartney Productions Limited), one of the World's largest music publishers. Volume 1 was released in 2012 and is discussed here.

Both discs in this series are for people who love Christmas music but are tired of the same old thing and offer a mix of famous, all-star talent along with a host of up and coming artists. Kudos to the former Beatle and to everyone involved for having the foresight to understand that not everyone wants to hear Brenda Lee every single hour, every single day, for a whole month every year.

The album opens with Paul McCartney, Jimmy Fallon, and The Roots performance of the classic rocker's "Wonderful Christmastime" that is more in the spirit of Christmas than his perennial standard. This take was originally performed on The Tonight Show in December 2016.

Other heavy hitters include Norah Jones performing a non-Christmas tune, a live version of jazz legend Horace Silver's "Peace." There is a Grace Potter original, "Christmas Moon," on which she takes a surprisingly successful turn as a crooner, and "Jesus Christ" by The Decemberists, an Alex Chilton song from 1981. Lake Street Dive gave us a fresh vibe of the old children's tune, "I Want a Hippopotamus for Christmas."

Rosanne Cash's "May Ev'ry Day Be Christmas," written by Louis Jordan has John Leventhal on guitar, bass, drums, organ, and piano. He also produced, recorded and mixed the song, so it's basically his baby. Cash simply added her vocals. Nevertheless, it's the standout track on the record.

Muna's cover of McCartney's "Pipe of Peace" drags compared to the original. It's another track that is not a Christmas song and that is always an annoyance on a holiday album but since it's an anti-war song it's not completely out of place.

US Girls very weird version of "Blue Christmas" is almost all electronics and Andrew McMahon is vocally challenged on "What Are You Doing New Year's Eve." He strains to succeed but ultimately does.

On the plus side, Barns Courtney and Lennon Ray Louise Stella offer us an interesting, modern arrangement of "Baby, It's Cold Outside." Unique takes of this particularly overplayed moldy oldie are always welcome. Stella, by the way, is one of the two real sisters who played the daughters of Rayna James, one of the two main characters in the TV hit show, Nashville.

There is some top flight stuff on this album even though the new set is not quite as compelling as the first one. However, Holidays Rule, Volume 2 should be a welcome addition to your Christmas music collection. I hope there is a volume three.