A Jolly Christmas From Frank Sinatra (1957) 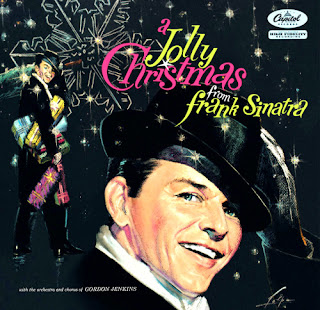 A lot has been written and discussed on TV, radio, in print, and on the web about Francis Albert Sinatra because of his 100th birthday this month. Unfortunately, as this blog approaches its eleventh anniversary in a few months I'm sad to say there has never been a discussion of his music on here anywhere. His mentions have been cursory and they have only come when his work was relevant as part of a discussion about other artists. This has not been an intentional slight and I have no excuses. I am a fan and own two box sets of his work along with a few other scattered albums and singles, so it's time to give you all some Frank during the holiday season of his centennial year.

A Jolly Christmas From Frank Sinatra was his first and best known Christmas album. It was released in 1957 with Gordon Jenkins conducting the orchestra and The Ralph Brewster Singers providing the background vocals.

The album is mostly a low key affair with Jenkins' lush orchestra backing the singing legend on an array of carols and traditional holiday standards. Sinatra is mostly subdued on this thirty-nine minute album and even on the more uptempo arrangements he never comes close to working up a sweat. The bouncier tunes include a unique version of "Jingle Bells" on which the singers share the spotlight with him to great effect. "Mistletoe and Holly," is a rarity because Sinatra shares a co-writing credit and while it's not exactly exuberant it stands out as one of the looser, more free-spirited tracks on the record.

Sinatra had a way of adding an earthiness to his ballads as "One For My Baby" has always proven but there is no grit on this record anywhere, perhaps because he recognized the sacredness of much of the music even though he was not a religious man.

A few of Ol' Blue Eyes' highly regarded contemporaries, Dean Martin, Nat King Cole, and Andy Williams among them, all released livelier Christmas music while Sinatra's record often sounds like he's having trouble staying awake. This isn't a criticism. It's simply to point out that his album is for an entirely different mood. The albums by Martin, Cole, and Williams are more suited for an activity such as decorating a tree or baking cookies while Sinatra's is for quiet listening by a crackling fire while snuggling with your loved one after the youngsters have gone to bed on Christmas Eve.

The 1987 CD reissue adds two bonus tracks, "White Christmas" and "The Christmas Waltz," with the orchestra conducted by Nelson Riddle.