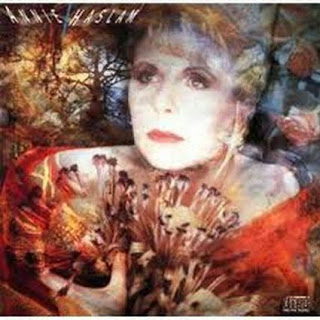 Some singers are outstanding in any format. They are the ones who can easily rise above the restrictions that are sometimes thrust upon them by record companies and popular trends. The great Annie Haslam, on this self-titled, eleven song CD that is her attempt at staying relevant after her time in the spotlight had passed, is one of them. Here, away from Renaissance, she succumbed to the very trendy synthesizers and electronic drums that took over pop music during the era this album was created. The electronics, of course, wash all musicality and originality out of her arrangements.

Fortunately, the English prog-rock singer uses her gorgeous five octave range to minimize the distractions. Haslam is so good here that the listener frequently doesn't even notice the mundane music behind her and by the album's mid-point she offers up two co-written tunes, "She's the Light" and "Celestine," that almost take her back to her roots. There are enough touches of violin, harp, and other sounds loved and used by her old band to keep the computerized musical demons in their places most of the time.

Despite the album's drawbacks there is still some good stuff to listen to. Haslam can still easily reach the upper registers. Listen to the end of "Wishin' On A Star" for proof.

She (not the band) supplies the melodies to "Moonlight Shadow" and "The Angels Cry" making both of them satisfying listens. Fellow British prog-rocker, Justin Hayward, a man who knows a little bit about composing melodies himself, wrote the latter and sings backup.

Mel Collins, former sax player for King Crimson, also helps out on "Let It Be Me" which is as close to R & B as a singer with Haslam's influences and track record can get without actually crossing the line.

The synths only get completely in the way on "When A Heart Finds Another" and on "One More Arrow."

The sessions were produced by Larry Fast who is famous for working with Bryan Ferry and Peter Gabriel.

Annie Haslam was the singer's third solo album and her first post-Renaissance effort.