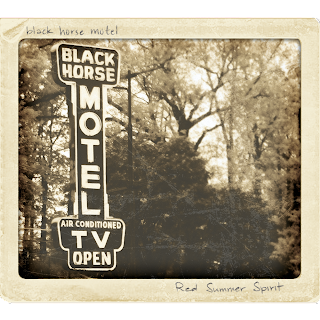 Every year, beginning the first Friday in August, Bethlehem, PA presents Musikfest, the nation's largest free music festival. It lasts ten days and spans two full weekends while offering hundreds of free acts. You can see and hear everything from polka bands, to jazz, to country, to hard rock.

The festival also brings in a few major performers each year who require you to purchase a ticket. This year's incomplete list of headliners includes Alan Jackson, The Moody Blues, Sheryl Crow, The Avett Brothers, and Weezer.

I've seen a lot of free concerts at Musikfest and it's a great way to find new artists. Such is the case with Black Horse Motel (BHM), a Philadelphia based folk-rock band, who released their first album, Red Summer Spirit in 2013.

Band leader and primary composer David Richardson sings most of the lead vocals, and he plays banjo, mandolin, and guitar as well. On the eleven track CD John Cradic also sings while assisting on guitar, and Johnell Lawrence plays a mean fiddle. Both have been replaced since the album was released by Galen Fitzpatrick and Ryann Lynch respectively. Desiree Haney supports the lower end with her cello.

With just those four on the front line BHM would sound like a modern, urban, bluegrass band (not that there's anything wrong with that) but it is drummer Megan Manning who turns them into a rock band. This lady can hang with anybody and in a live setting she provides almost all of the energy that fuels the rest of the group. Manning's contributions are less apparent on Red Summer Spirit because in the studio the full band allows the songs to be the star of the show (and that is as it should be) but on Saturday night she rocked with all of her might.

The album, led by the opening track, "The Apology" is thoughtful without being too arty and you can dance to it too. Overall, the quintet gave us a nice full length debut.