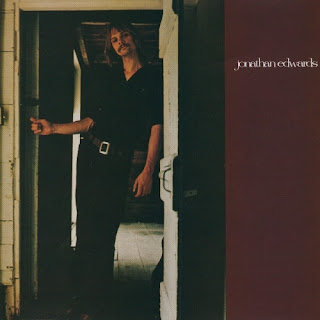 To most people guitarist and singer-songwriter Jonathan Edwards is a genuine one hit wonder. His first single, "Sunshine," an exuberant, acoustic tune, the kind that actually made the charts back in the era of peace and love, went to number four in the fall of 1971.

After leaving a blues band in 1969 to play acoustic folk music as a solo act, Edwards recorded his only well known song, one of many popular tunes during the Viet Nam War era that gauged the temper of the times perfectly. The hit was a last minute addition to his eponymous, debut album, a very fine twelve song set of mostly original material. "Sunshine" is usually recognized by the lines "He can’t even run his own life/I’ll be damned if he'll run mine."

The LP's opener, "Everybody Knows Her," a track just as uplifting as the single, also received some substantial airplay on FM radio and was definitely one of the LP's better offerings.

Two songs came from the pen of a former bandmate, Malcolm McKinney. The first one, "Don't Cry Blue" is an upbeat love song. Another highlight is McKinney's beautiful "Sometimes" (often titled "Sometimes in the Morning" elsewhere). The live version of this song from Edwards' performance at Puerto Rico's Mar y Sol Pop Festival from 1972 (click here to listen to it) and featuring one of his sidemen, bassist Stuart Schulman, on violin is truly outstanding.

Many believed that Edwards would become a star but unfortunately it was not to be. His followup album, Honky Tonk Stardust Cowboy, was also highly regarded but didn't sell nearly as well as its predecessor and his third long player, Have a Good Time for Me, was uneven at best.

Eventually, Edwards faded into oblivion and gave up music for farming. However, once the art form invades your soul it can never fully leave so after the singer-songwriter's friend, Emmylou Harris, asked him to sing backup on one of her albums he revitalized his career.

The little remembered folkie continues to record albums and tour today to small but approving audiences.