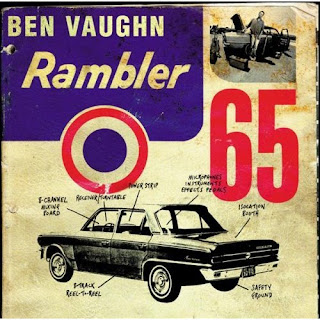 New Jersey's Ben Vaughn is a well known rocker and respected producer in the music industry. He has recorded several albums of his own and has produced discs for Ween, Los Straitjackets, and Alex Chilton, among others. He has also written music for That 70s Show and Third Rock From The Sun. Currently he also has a weekly, one hour, syndicated radio show, The Many Moods Of Ben Vaughn.

Mostly forgotten today is Vaughn's eighth CD, released in 1997, Rambler 65. It has one of the more bizarre behind-the-scenes stories in music. The CD's title refers to the fact that except for some dubbed in sitar on "Levitation" he played every instrument himself in the back of his car, a 1965 Rambler American. (Imagine the site of someone playing a sitar in the back of a mid-sized sedan). Within the limitations of his "studio" Vaughn produced some mighty fine old time rock 'n roll on his eight track tape recorder. He played electric guitar, bass, keyboards and, believe it or not, a snare drum and cymbal to go along with his drum machine and rhythm box. He even lists "one quart of Quaker State oil" in his credits.

Despite the novelty of its concept the music on this disc is no joke. The opening track, "7 Days Without Love" is a dead ringer for Nick Lowe and most of the rest of the songs are cut from the same fabric. The tunes are mostly upbeat. The best tracks are "Levitation," "Boomerang," "Perpetual Motion Machine, "Rock Is Dead," and "Heavy Machinery." It's a party record, there is nothing deep, and you'll want to listen to it while cruising around in your Rambler, Edsel, DeSoto, Hudson, or Gremlin. The songs are not upscale enough for a Delorean and that's meant as a compliment.

Vaughn also includes some short instrumentals from the soundtrack to the video, Rambler 65, and closes the album out with an old radio commercial for the car complete with live DJ patter.

Not recommended for prog-rockers.