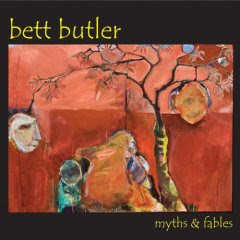 Jazz singer Bett Butler admits she is not the most prolific recording artist on Earth but if she continues to release an album once every six years and the results are as good as they are on Myths & Fables you won’t hear me complaining. In Butler's case quality surely tops quantity. Despite hailing from San Antonio, TX, a city known more for country music and Americana rock, her obvious influences are the more progressive forms of jazz.

Butler's vocals alternately remind the listener of Ella Fitzgerald, Sarah Vaughan, and Lena Horne, all singers who deserve their place in the pantheon of the great vocalists of jazz. While the spirits of those three talents live within her soul Butler has weapons in her musical arsenal that they never possessed because she is also a talented pianist and composer.

Myths & Fables, is Butler's first CD since her debut, Short Stories, in 2001. She and her bassist/producer Joel Dilley, who also doubles as her husband and has a recording career in his own right, offer a highly eclectic set of songs that stands apart from most of today’s vocal jazz because lyrically her work is on a higher level than the genre normally requires. Butler sings about an unhappy German painter, Gabriele Munter, on "For Gabriele" and a family’s dark emotional state of mind on "Secrets." She takes on the roll of an unfulfilled lover on the funny "It Ain’t Over 'Til It’s Over" and tells us all how much she loves her dog without getting sappy on "Angel In A Dog Suit."

Butler is also not afraid of tackling politics and racism on "Nothing To Be Proud Of." It's a fine song that proves she is a thinker as well as an entertainer. It's not nearly as terrifying or as condemning as Billie Holiday's "Strange Fruit" yet her societal concerns are still pointed and valid. (For added emphasis the painting on the cover of the disc, shown above, is by artist Courtney Reid and is also titled "Strange Fruit.")

At times Myths & Fables appears to be just as much Dilley's album as Butler's. He wrote most of the arrangements for songs the singer wrote at her piano. Significant instrumental breaks allow Dilley, trumpeter/co-producer Cecil Carter, and a host of others to glide from bossa nova, to blues, to be-bop, to avant garde jazz, and more with very little effort. This is not smooth jazz. Kenny G was not not invited to the party and that is a very good thing.
Bett Butler Jazz Vocals Singer-Songwriters