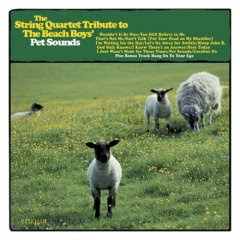 Vitamin Records, the label that has issued dozens of string quartet tribute albums for artists as diverse as Slayer, Enya, Bon Jovi, Oasis, Warren Zevon, Bjork, Radiohead, Rush, Fleetwood Mac, and more has released a nice reworking of The Beach Boys classic Pet Sounds. While I can't envision either string quartet fans or Slayer fans listening to classical arrangements of that band's work Pet Sounds is music that easily lends itself to a classical treatment.

Despite the limitations of using only three string players and a percussionist the quartet's arrangements are very close to the vest. Therefore, more than anything else, what one notices most about this CD is Brian Wilson's gift for writing melodies. The central themes and melodies of many Beach Boys songs were often buried under their gorgeous harmonies and Wilson's wall of sound. When laid to bare the sparseness of these arrangements reveal the beauty of his work.

The Angry String Orchestra are David Keen on violin and viola, Deborah Assael on cello, and Michael Goetz on double bass. Percussionist Doug Munro also served as producer and arranger of the CD.

See Vitamin Records' website for a complete listing of their string quartet tributes.