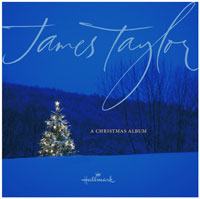 The following review first appeared online in November 2004. Therefore some of the information about how to obtain a copy is now out of date. A year after this review first appeared the album is now considered a collector's item. Unless you can find a few leftover copies at your local Hallmark store the album appears to be available only at places such as Amazon.

James Taylor's first ever Christmas CD, simply titled A Christmas Album, is now available only at Hallmark stores. I have bought some of these Hallmark Christmas CDs in past years and they are usually mediocre or worse, partially because only half of the tracks are by the featured artist. The remaining tracks usually feature the London Symphony Orchestra who, at least on these Christmas CDs, is a group with very plodding arrangements. However, this year Hallmark has outdone themselves. A Christmas Album features JT on all 11 tracks, is produced by jazzman Dave Grusin, and features trumpeter Chris Botti on "Winter Wonderland," Natalie Cole on "Baby It's Cold Outside," and harmonica player Toots Theilemans on “The Christmas Song.” Other jazz stalwarts such as guitarists John Pizzarelli and Michael Landau are prominently featured throughout the album as is Grusin’s piano. This is Grusin’s CD almost as much as it is Taylor’s because he did all of the producing and arranging and wrote the CD's only original song, “Who Comes This Night.”

The CD’s tone is typical Taylor, meaning it never strays too far from his trademark soft folky rock but this one has a touch of smooth jazz sprinkled throughout because of the Grusin influence. Taylor tries to kick it up a notch at least once every album and this time he pulls it off with a bluesy version of “Jingle Bells.”

As always, the CD will be sold this year in Hallmark stores only, and next year at non-Hallmark stores that carry its product line, and then it is over. Done! Finished! Out of print forever! I have a feeling Taylor's will sell much faster than than any of the previous Hallmark Christmas CDs so run out right now and buy your copy because this may be the last Taylor music we see for awhile. For the first time in his long career he is without a label. He and Columbia parted ways after releasing October Road in 2002.

I know this sounds like a commercial but the word needs to spread. The album is $10.95 if you purchase it alone but the price drops to $6.95 if you buy three greeting cards. This time of year most of us will probably purchase at least that many so this disc is a potential steal.

Both JT and Grusin have seen to it that this album is far superior to any of the previous Hallmark limited edition holiday releases. If you like James Taylor you will like this album.